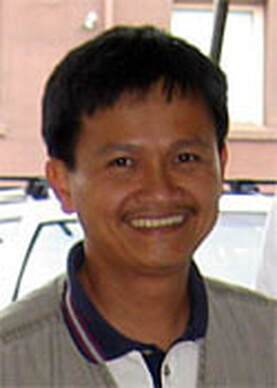 Phạm Quốc Hùng​ was born 1966 in Huế, a city with a rich artistic history and once the capital of Vietnam Dynasty. He studied art at the Huế Fine Arts University where he graduated in 1992. Immediately after graduation, Hung began showing his work in a number of exhibits while his wife, Anh, managed a gallery in the old town section of Hoi An.

Hung loved art since he was a young boy, enjoying many of the artists hanging in galleries around Hue as a child. Early teachers held back his aspirations saying that "[he] would never have the skills to become an artist". Hung persevered, developing his own unique style, and was finally recognized by a professor at the Huế Fine Arts University.

Working in a variety of mediums including oil painting, woodblock, and traditional Vietnamese silk paintings, Hung's work is exhibited throughout galleries, companies, and private collections throughout Asia, Europe, and the United States.

Articles & Reviews
​
Selected Exhibitions
Public/Private Collections (Partial List)
​
And in many private collections and homes around the world including throughout the United Sates, Hanoi and Huế, Viet Nam; London; Chile; and the Netherlands.